The Hockey Stick Illusion — Climategate and The Corruption of Science 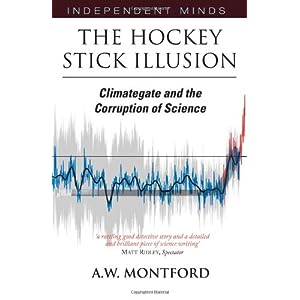 The Hockey Stick is that amazing graph that shows earth temperatures mildly fluctuating in a narrow band until the late 20th Century when temperature data from around the globe suddenly ticks substantially upward, lending support to the idea that human activity is causing unprecedented global warming. It was so good it convinced nearly everyone that man-made global warming was a huge problem that must be solved and could only be solved by instituting enormous reductions in so-called “greenhouse gases” especially the one we exhale every time we breathe.

The whacked-out crazy schemes by which many apparently still believe humans can alter the earth’s climate includes such nonsense as “Carbon Dioxide Sequestration” whereby coal fired power plants or any other facility that releases carbon dioxide into the atmosphere will be required to capture it and pump it into massive underground vaults. This will be hugely expensive, if it can even be done. Oil and gas drillers regularly capture salt water from their operations and pump it underground through old abandoned wells. But containing a gas like carbon dioxide is a bit tricky by comparison to salt water.

At any rate, to the extent the Hockey Stick graph is the justification for this madness, there is the little matter of the Hockey Stick being a scientific fraud the likes of which haven’t been seen since the appearance of Piltdown Man in 1912, which was supposed to be the missing link between apes and humans. Piltdown was exposed in 1953 as a hoax and a fraud achieved by linking a human skull with the jaw bone of an orangutang.

Forty-one years is what it took to uncover that fraud, but the hockey stick graph began to be questioned almost immediately after it first appeared in a 1998 article in the theretofore prestigious science journal Nature. After serious doubts were raised about the authenticity of the Hockey Stick this venerable science journal disgraced its trusted name by joining forces with those who resisted efforts to expose the truth about the how the Hockey Stick graph was based upon falsified data. So much for that journal’s devotion to scientific inquiry.

By 2003 science sleuth Stephen McIntyre was asking the Hockey Stick author Michael Mann for the data so he could check it himself. Apparently no one else had ever asked for the data. At first Mann obliged but when McIntyre pointed out that the data Mann had furnished was full of errors and had other problems Mann stopped cooperating. Then the Climate Research Unit of East Anglia University email dump showed that “Mike’s Hockey Stick Trick” was not just a poor job of research but an intentional deception.

The sordid story of the Hockey Stick is told by Andrew Montford in the book pictured above, The Hockey Stick Illusion — Climategate and the Corruption of Science, available at Amazon. Science writer Matt Ridley says of Montford’s book,

is one of the best science books in years. It exposes in delicious detail, datum by datum, how a great scientific mistake of immense political weight was perpetrated, defended and camouflaged by a scientific establishment that should now be red with shame. It is a book about principal components, data mining and confidence intervals—subjects that have never before been made thrilling. It is the biography of a graph.

Ridley is generously subdued in his choice of calling the Hockey Stick a “scientific mistake.” His true thinking is revealed by his use of the word “perpetrated” in the same sentence. Mere mistakes are made, frauds are perpetrated. True scientists are devoted to truth and therefore do not seek to “camouflage” their mistakes. The East Anglia emails fairly well show the Hockey Stick to have been an intentional fraud, if it were not already obvious.

Michael Mann had a clear motive. Massive amounts of money in the form of federal and charitable foundation grants were flowing to Penn State University where Mann did his “research.” If his work showed that earth’s warming was due to natural causes the money would have dried up and Mann would have been an obscure climate researcher in a university rather than the well-funded and well-paid internationally known global-warming guru that he became. Alas, he is now destined to go down in science history along side the forger of Piltdown Man. Michael Mann, however, will forever have his name associated with a scientific hoax that captured the minds of millions whereas the identity of the forger of Piltdown Man was never discovered.