Rush Limbaugh took Trump to task on laying the blame for the Ryancare bomb on the Freedom Caucus. Rush points out that when a football team loses a game the head coach doesn’t single out any particular players for the loss. Instead the coach usually takes the blame so as not to create discord in the locker room:

So President Trump [is] doubling down here on his criticism of the conservatives in the House, the Freedom Caucus. The Politico headline: “Trump Goes After Freedom Caucus Ringleaders.” Now, what kind of a group has ringleaders? Gangs, right? Criminals, bank robbers, drug networks. The ringleaders of the group are usually criminals. I mean that’s the inference people draw. So here’s The Politico: “Trump Goes After Freedom Caucus Ringleaders.” Mark Meadows, Jim Jordan, Raul Labrador. Says here that Trump’s offensive could hurt them in their home districts where he is extremely popular. 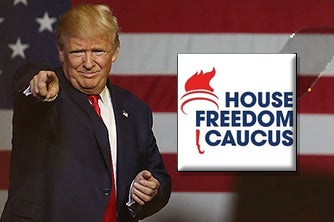 “‘If @RepMarkMeadows, @Jim_Jordan and @Raul_Labrador would get on board we would have both great healthcare and massive tax cuts & reform,’ Trump tweeted Thursday afternoon.” And we have the New York Times, or is it the Washington Post? It’s the New York Times. “How the Freedom Caucus Is Undermining the GOP.” Yeah, you see? It’s always the conservatives that are doing the “undermining.” It’s the conservatives that have “ringleaders.” It’s Trump calling them out. I want to take you to your average Sunday or Monday night in the National Football League.

At the end of the game, both coaches conduct postgame press conferences. How many times do you remember a head coach calling out two or three players as the reason the team lost? How many times have you heard, say, Bill Belichick say, “Well, if Brady hadn’t thrown that interception, if he hadn’t thrown that second interception — and if Edelman would have caught a couple damn more passes — we might have won the game.” You don’t hear that, do you? What you hear most of the time is that coaches, for the sake of protecting the players and not distracting or splitting the locker room…

The coach takes the hit, and Andy Reid may be the best at doing this. Whatever goes wrong in a game, Andy Reid says in the postgame press, “That’s on me. Yep, that one’s on me. I didn’t prep ’em well. I didn’t… They weren’t ready to play, but that’s on me. That’s on me.” You very seldom see a head coach single out players, whether stars or not, in the aftermath of a defeat. But here you got the three leaders, the three-ring leaders of the Freedom Caucus being singled out.

If Trump really wants the those “ringleaders” to get on board he might save his venom for the Democrats.

Meanwhile, the Freedom caucus has identified two problematic provisions they claim will make insurance premiums higher. They say they’ll vote for the bill if those two provisions are taken out.